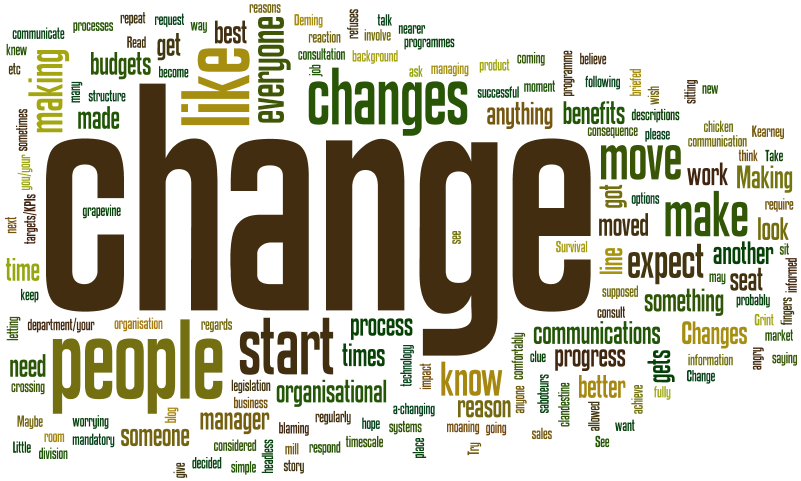 At the inaugural meeting of a change transformation effort under way at a hospital in San Jose, California, nurse Michelle Dela Calle faced a room full of people who were discouraged by the organisation’s earlier attempts at change. She stood and shared a story of her own about how making people wait for hours in the emergency department seemed like a violation of her caregiving role.

Her story seemed to move people. When she was done speaking, she could tell that people finally understood the need to change. Change efforts often crumble into excruciatingly dull meetings and PowerPoint presentations. The hospital’s effort where Calle worked, however, is not just stopped at presentation. A mid-level manager in the 5000-employee hospital, she leads a 70-member group on patient flow as part of a larger organisational effort. Her ability to lead and inspire – to become a change leader from her position as a mid-level manager – is helping her team produce results.

As an example, flow in hospital management is improving: patients are moving from the emergency department to beds faster, and the number of patients discharged before 11:30 a.m has doubled.

A study was conducted of large-scale change and innovation efforts in 56 randomly selected companies in the high-tech, retail, pharmaceutical, banking, automotive, insurance, energy, nonprofit and healthcare industries. Most of the efforts failed. But a hallmark of the successful 32 percent  was the involvement of mid-level managers two or more levels below the CEO.

Another study published on ResearchGate also mentioned that there is a significant impact when middle management is involved in an organisation strategy. The most significant contributions are collaboration of various ways in which middle managers influence strategy making and organisational change, beyond mere implementation. An increased understanding of process was also formed leading to either effective strategy formation or dysfunctional role conflict.

In successful cases, mid-level managers were not merely managing incremental change. They were leading it by working levers of power up, across and down within their organisations. So what were the defining characteristics of successful change management? Based on Harvard Business Review Blog Network, here are the four secrets.

1. Change leaders have a North Star – and they talk about it

Many change efforts fail because people reduce themselves to checking boxes in safe, defensible systems such as Lean and Six Sigma. Successful change leaders, on the other hand, are open, bold, and have a clear sense of their motivations. For instance, Kirk Girard, planning manager for the County of Santa Clara, was tasked with overhauling the permitting department, which issued 4000 permits per year from behind a 70-foot long counter with no public computers.

When complaints to elected officials started mounting from property developers dissatisfied with delays, Girard pulled together a team from many divisions to address the problem. Drawing on his experiences as a sustainability advocate, he motivated the group by reminding them that people are more likely to abide by regulations if regulatory authorities are credible.

The question then became: How to establish credibility by making permitting easier and quicker? With their goals aligned, the department was able to get rid of some of the hitches in the process, such as communication between siloed departments. The permitting time has since been nearly halved for key pilot projects.

2. Change leaders use a GPS to guide them toward their North Star

Change leaders are visionaries. But they recognise that they – and their organisation – require a process to help them achieve their goals. In essence, an action plan. They adopt a process, stick to it and inspire others to embrace it. One five stage process is:

In many cases, successful change leaders create a direct line of communication to top executives. For example, Gerald Wright, a vice president in technology services at Hewlett Packard, has shown himself to be a master at top-down, bottom-up, and lateral mobilization. In 2007, he was handed the daunting task of fixing HP’s worldwide compensation structure for 20,000 sales employees.

He worked through the corporate strategy group to call direct meetings with the CEO Mark Hurd. He was expert at offering executive VPs the quid pro quos necessary to establish relationships, such as offering sales support for one of the executive’s goals, or offering to make an introduction in his vast network. He then used the executive VPs’ personal recommendations to pull together a broad-based team from many divisions.

That team uncovered the fact that there were 1500 compensation plans at HP, 35 percent of which were for single individuals. Wright’s effort subsequently brought that number down to 40.

Paul Taylor was managing a UK-based factory for LF Beauty UK Ltd., part of a $25 billion retail conglomerate, when he took on the task of reducing waste in the assembly line. He asked workers to collect any waste that was produced over the course of a week. They filled 40 pallets with faulty bottles and packages of beauty products.

Taylor gathered the factory’s 600 employees around the pallets to help everyone visualize the enormity of the waste, then mobilized a large cross-boundary group of managers and line workers. Taylor created a sense of urgency and then kept up the pace with tight deadlines. For instance, the diagnosis phase – which uncovered weak spots in the process used to create the materials – was carried out by rapid-response teams with a six-week deadline. Throughout the process, the company was holding short, focused weekly or twice-weekly meetings. Taylor imbued the process with his own urgent pace.

In the space of a year, the company cut costs by nearly $1 million. According to Taylor “This wasn’t just a cost-cutting exercise. It was a rapid cultural and mindset transformation of my factory employees.”

Wright and Taylor have been promoted since then, with managers like Girard and DelaCalle sure to follow. Success begets success. And leading a successful change effort shows the marks of a true leader.

A manager eager to transform yourself into a change leader? The first step is finding or making a full commitment to your work, personally and professionally, such as through a managerial vision statement. DelaCalle’s reads, in part: “Encourage and inspire others to action and forward progress. Make personal and professional decisions with balance and thoughtfulness so those around me and I myself feel proud.”

Three other steps are:

Mid-level managers help incremental change – but many are change leaders in the process of being developed. When they align their personal goals and strengths with their organisation’s goals, they can become extraordinary leaders.