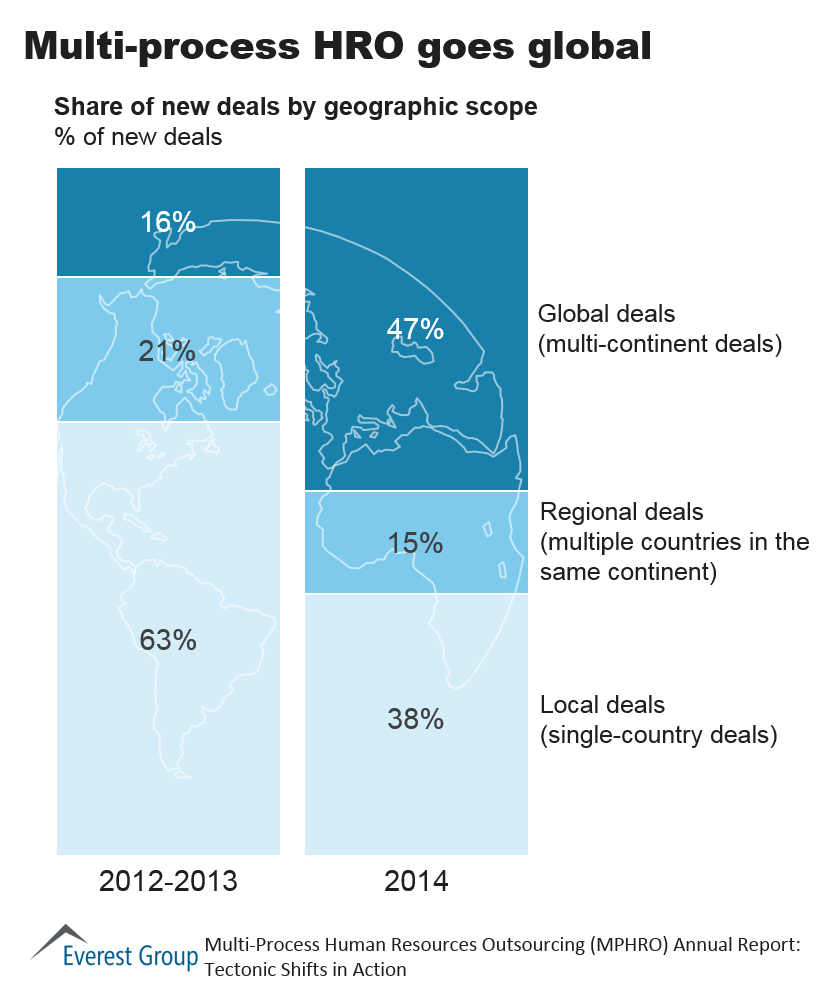 The Multi-Process Human Resources Outsourcing (MPHRO) market is witnessing rapid evolution – the dynamics have changed in the last couple of years and its reach has broadened.

While the incumbents still dominate the more mature MPHRO markets (North America and Western Europe), they are facing tough competition from newer entrants in the emerging markets, which are the primary growth levers in MPHRO.

The focus is steadily shifting towards the emerging markets (majorly APAC), where an understanding of the local dynamics is becoming the proverbial “key to success.” Buyers are demanding more than just cost-reduction, and hence, cloud and analytics are growing in importance. Companies such as Workday and SuccessFactors have disrupted the market landscape, prompting HRO service providers to take notice. What is also being witnessed is that service providers are moving out of their “comfort zone” to adapt to this changing environment.

The MPHRO market continued its steady growth at the rate of about 4 percent to reach US$3.42 billion in annualized revenue in 2014. The biggest contributor to this growth was new deals, and, in this respect, the Asia Pacific region became the region to watch.

More than half of the new deals had Asia Pacific in scope and more than a third got signed there, indicating increasing importance of APAC region in the MPHRO market.

From a technology perspective, Business Process as a Service (BPaaS) continued to be adopted aggressively by MPHRO buyers in 2014, due to increasing confidence in the model and the popularity of Software as a Service (SaaS) platforms such as Workday and SuccessFactors. “Adoption of third-party BPaaS solutions have been on the rise over the last few years, with Workday and SuccessFactors emerging as the key vendors,” said Rajesh Ranjan, partner at Everest Group. “In fact some MPHRO providers now have almost a third of their clients on one platform or the other. Mid- and large-size companies lead the way in adoption of Workday and SuccessFactors, with 70 percent of such deals in the developed markets of North America and Europe.

Key findings in the report are:

Also read: A Complete Guide to Outsource Your HR